"At the cutting edge of quality lawns"

While you can lay turf at any time of year in Britain, some seasons are more challenging than others. However, depending on your particular situation, you might not be free to choose when you can do it. Autumn and spring are the two most favoured seasons, but there may be other considerations that make those seasons impractical for you. So, here are the seasons presented in order of turf-laying popularity. Each season has its own unique requirements for achieving the best results.

Traditionally, the autumn season has always been considered the best time to lay turf. The soil has been heated throughout the summer, and rainfall increases at this time of year, too. These factors combine to produce warm, moist and loose soil that's easily prepared for receiving turf and providing the ideal environment for healthy root growth. As it's the busiest season, local stocks of turf may be quickly sold out, so make sure you get yours in time or be prepared to look further afield than your nearest garden centre. Aim for the earlier or mid part of the autumn season in which to prepare the soil and lay the turf otherwise you start to lose the advantage of the soil warmth that has built up over the summer season. In late autumn, it begins to rapidly fade as the winter season approaches. When the turf is finally and successfully laid, it can then be left undisturbed throughout the rest of autumn and all winter as not many lawn activities go on at that time. By the time the following year's warmer seasons return, the turf will be healthy, attractive and inviting - just as it should be. Not too far behind in popularity, spring is also considered an excellent season for turf laying. The ground starts to warm up nicely and there's usually plenty of spring rain around to moisten it and make it easy to prepare. The middle of spring is the best time to lay turf during this season. In early spring, the soil is still recovering from winter's icy grip, but a month or two later, it's warmed up, moistened and far more amenable to turf laying. Apart from those minor considerations, there's little difference between choosing spring or autumn as the best time to lay turf. As with autumn turf laying, don't leave it too late or you may have trouble finding local garden centres that haven't sold out of turf after the mid-spring rush. 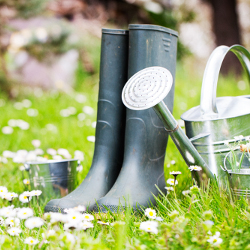 The advantage of summer turf laying is that the soil is at its warmest, but, unfortunately, it's not at the optimal moisture level due to reduced rainfall during the summer months. That means you have to get out and do nature's job yourself with a garden water hose to in order to prepare the soil. Keep in mind, too, that while the natural warmth of summer is great for preparing the soil, unlaid turf deteriorates more quickly in warmer weather, so you need to lay it promptly after obtaining it and ensure it receives enough water. As laying turf can be quite strenuous, it can be hot and sweaty work at this time of year, although, given Britain's typically unpredictable and often disappointing summers, this is rarely a problem. More likely, it will be comfortably mild, and you can take advantage of the longer hours of summer daylight in which to work well into the evening to complete the task before darkness descends. The month of June provides the best conditions of the summer season in which to lay turf as there is ample soil warmth and the longest hours of daylight in which to lay the turf. July and August are less favourable as increased temperatures mean that rainfall may evaporates before it has time to provide your lawn and soil with the water it needs. It's not a problem if you supply enough water yourself, but if your local council decides to implement a hosepipe ban due to drought conditions, it could be catastrophic for your lawn. 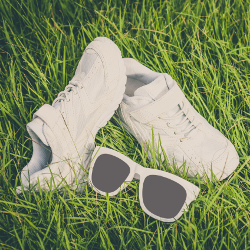 By far the least popular season, winter sees little turf-laying activities, and turf is much harder to source at this time in garden centres as there's far less demand for it. People are more interested in obtaining Christmas trees and festive garden decorations than laying turf, so garden centres focus on stocking and supplying those instead. Generally, most people with turf-laying experience recognise that this season is not the best time for carrying out this work, and it's definitely the least comfortable time to do it unless you're a fan of cold weather or don't mind laying turf while wearing gloves and warm clothing. Most people will only lay turf during the winter season if commitments or other time constraints prevent them laying the turf at any other time. If frost is present, don't even attempt to buy and lay turf. Wait for the frost to disappear. In winter, you're also limited by the much shorter hours of daylight in which to work, especially in more northern parts of the country. At least, unlike in summer, the cold winter weather does buy you a little more time in which to keep the unlaid turf in good condition until the job is completed. 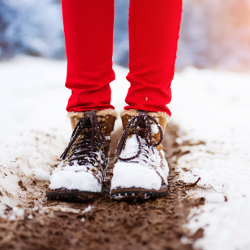 A Turf for all Seasons

Finally, having chosen the time to lay your turf, and having successfully located a source to buy it, ask the experts there for advice on the best turf blend they have available for that particular season. Modern advancements in horticultural technology have produced a range of turf blends suited not only to various soil compositions but that are also suitable for 'off-season' root growth. Previously, autumn and, to a lesser extent, spring were the only seasons you could expect successful results when laying turf. That's no longer the case. Some turf blends can now do just as well in the more challenging seasons provided you follow their soil preparation and watering requirements carefully.

How to lay turf?

How to apply mulch

Cookies are very small text files that your computer downloads when you visit a website to recognise your computer or mobile device.

We use cookies to provide you with the best experience and for anonymous statistical purposes.